As part of an event organised by Music Durham and Durham Festival of the Arts, we played in an outdoor concert in brilliant sunshine on 9th June, alongside a selection of brass and concert bands. There were also workshops in circus skills and face-painting — and a gamelan workshop for the audience to learn a piece of Javanese music after we’d finished our performance.

Rehearsal and set up

View from the Playpen

Does playing the gong make everyone smile?

Yes (based on a sample of two, anyway)

After our performance, the audience gets a go

…meanwhile, some of us were loitering at the back learning about the suling

The gamelan is now installed and set up in Dunelm House. Today we had our first rehearsal in the new space, getting ready for a performance on Saturday… 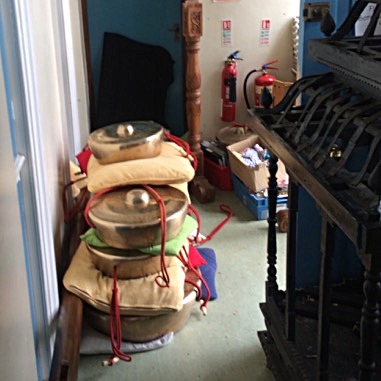 Kempul waiting to be loaded into the van

Last weekend a team of Durham gamelan players packed up the instruments and associated equipment and moved them out of Durham Observatory, where they’ve been for the last few years, and into Dunelm House where our new space is being made ready for us over the Easter holidays.

While we’ll miss the Observatory and its picturesque surroundings, this will be an easier venue to reach for anyone based in central Durham, as it’s a lot closer, and not located at the top of a hill. We’ll post another update once we’re properly moved in…

Both the gamelan and angklung groups performed at Khatulistiwa 2.0, an event organised by the Durham Indonesian Student Community which showcases the diverse culture of the islands of Indonesia. The event’s name, ‘Khatulistiwa’, means ‘equator’ in Bahasa Indonesia, the official Indonesian language.

As well as our performances, there was a selection of Indonesian food, traditional games, costumes, dance performances, and a workshop in Javanese writing.

On Friday we had an excellent workshop with visiting tutor Aris Daryono. Aris is a musician, composer and teacher based in London, and he travelled up to spend the afternoon with us in the Observatory teaching us new pieces with a focus on Jogya style ornamentation.

We spent the first half of the afternoon learning Ladrang Uluk-uluk, a piece that is often played before the beginning of performances in order to attract the attention of people in the vicinity and encourage them to come and listen. Unlike a lot of the music we’ve played before, there’s so much ornamentation in this style that every instrument was playing a different variation, and there were sections in which nobody was actually playing the written balungan (skeleton/melody) part.

We also worked on some srepegan and sampak with singing – particularly good practise for our listening skills as this involved lots of transitioning between different sections and listening out for signals from the drum in order to know when to do so. We had the additional challenge of learning the vocal melodies from the numeric notation that is predominantly used in gamelan music, which takes a bit of getting used to for those of us who are more familiar with Western score notation!

We’re hoping to do some more work on all of these new pieces in the near future and add them to our repertoire.

We began our first session of the year by playing through Ladrang Wilujeng. This piece is often played as a “welcome” at the beginning of events and concerts, as it is associated with good luck and prosperity – so an appropriate way to start off 2018.

Here’s a video from a few years ago from the 2013 “Gamelanathon” at the South Bank Centre, with members of five different gamelan groups (including Durham) all playing this well-known piece.